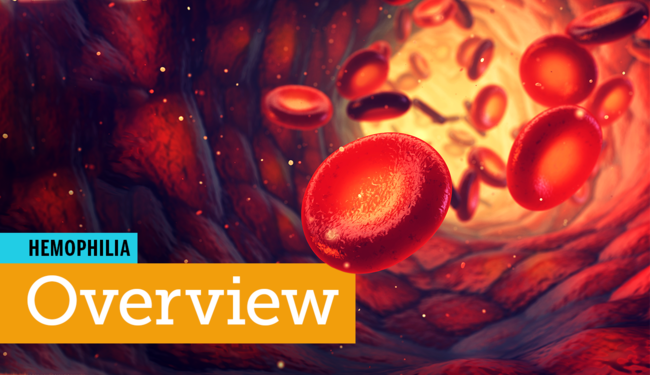 Hemophilia is a chronic condition with no cure, but it can be effectively treated in most people. Uncontrolled bleeding is the most common symptom of hemophilia, but it can also cause pain, fatigue, depression, and joint damage that interferes with mobility. On average, people with hemophilia have similar lifespans as people without hemophilia.

Blood clots by a complex process called the coagulation cascade. The coagulation cascade involves many different proteins called factors. Each factor plays a vital role in blood clotting. If any one of these factors is deficient or ineffective, blood cannot clot correctly, and dangerous bleeds may result. In hemophilia and related bleeding disorders, the body either makes too little of a clotting factor or makes an abnormal, ineffective version of the factor.

The three most common types of bleeding disorders are von Willebrand disease (lacking von Willebrand factor, or VWF), hemophilia A (lacking factor VIII), and hemophilia B (lacking factor IX). Less prevalent bleeding disorders include deficiencies in factors I, II, V, VII, X, XI, XII and XIII. Hemophilia symptoms can be mild, moderate, or severe. The more deficient a person is in a clotting factor, the more severe their hemophilia symptoms tend to be. Read more about types and severity levels of hemophilia.

The History of Hemophilia

Hemophilia was known as the “royal disease” during the 19th and 20th centuries because it affected the royal families of several European countries. Queen Victoria of England is thought to have passed the genetic mutation to three of her children, who subsequently married into the royal families of Spain, Germany, and Russia. Several of Queen Victoria’s descendants died young due to hemophilia. The current British royal family does not carry hemophilia.

Life expectancy in the early 1900s for a person with hemophilia was 27 years, and disability was common by age 20. In 1905, German researcher Paul Oskar Morawitz discovered and categorized clotting factor defects for factors I, II, III, and IV. Transfusion technology improved during World War II, and people with hemophilia were able to receive transfusions of fresh blood or plasma containing their missing clotting factor. By 1953, 13 clotting factor defects had been discovered. Factor IX, or hemophilia B, was originally dubbed “Christmas disease” by English hematologist Rosemary Biggs. Biggs named the bleeding disorder after her patient, Stephen Christmas, who was the first person identified with hemophilia B. Life expectancy for a person with hemophilia reached 39.7 years by 1960.

The demand for plasma continued to rise. Clotting factor concentrates were made by combining plasma from as many as 20,000 donors and distributing the treatment in bulk. During the 1970s and 1980s, there was very little donor screening or testing. Most of the people with hemophilia receiving clotting factor concentrates during this time were infected with hepatitis. Many doctors considered this an acceptable risk because of the increased life expectancy and quality of life the concentrates afforded people with living with hemophilia.

What doctors didn’t anticipate, however, was the spread of HIV and AIDS. In the early 1980s, doctors recorded several cases of AIDS in hemophilia patients. In 1982, the nonprofit World Federation of Hemophilia presented evidence to the Centers for Disease Control (CDC) and blood banking companies that AIDS may be a blood-borne disease. The CDC rejected this claim due to “lack of research,” and blood banking companies refused to change the way they screened donors. At that time, the CDC wrongly believed that AIDS only affected homosexuals and was not an infectious disease. Contaminated clotting factor continued to be distributed.

Between 1981 and 1985, half of the population of hemophilia patients in the U.S. was infected with AIDS by contaminated clotting factor, which contained pooled plasma from thousands of donors. AIDS rates in the European hemophilia A population was estimated to be as high as 80 to 90 percent during this time. Many people with hemophilia stopped treated bleeds unless they were very serious. Screening for AIDS/HIV would not begin at blood banks until 1985.

Ryan White, a teenager from Indiana with severe hemophilia A, acquired HIV after a blood transfusion. White faced discrimination and became a prominent activist for the rights and dignity of those with AIDS. White was banned from attending school due to stigma and fear of HIV infection, but his mother fought his case in court and won. On April 8, 1990, Ryan died of an AIDS-related illness at age 18. President George H.W. Bush signed the Ryan White CARE Act into law in August 1990, allocating $2 billion to fight HIV/AIDS.

Today, exposing clotting factor concentrates to heat or adding certain ingredients has eliminated the risk of the transmission of HIV and hepatitis. Recombinant clotting factor products became available in 1989. These products are safer because they are a clone of clotting factor and do not actually contain human blood. Prophylactic use of clotting factor became common with the availability of recombinant products. Today, the life expectancy of a child with hemophilia is similar to that of someone without the disease.

How Common Is Hemophilia?

How is hemophilia diagnosed?
Severe bleeding disorders are often diagnosed within the first month of life. People with moderate or mild bleeding disorders may not be diagnosed until later in childhood or even as adults. Hemophilia is diagnosed with a variety of tests, including a blood test to check whether any clotting factors are deficient, genetic testing, and testing to see how long it takes the blood to form a clot. Learn more about the process of diagnosing hemophilia.