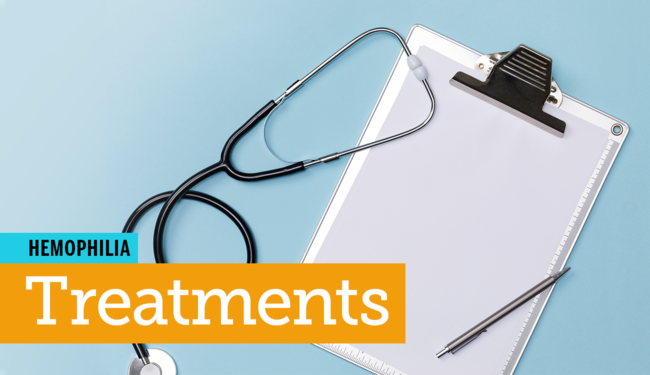 Many people with bleeding disorders in the United States are treated at hemophilia treatment centers (HTCs). The Centers for Disease Control and Prevention (CDC) funds the network of approximately 140 HTCs across the U.S. and its territories. Each HTC is staffed with hematologists (specialists in blood-related diseases), orthopedists (joint specialists), laboratory technicians, and nurses who specialize in treating people with bleeding disorders.

Types of Treatments for Bleeding Disorders

Some factor replacement therapies are approved for all of the above uses, while others are only used for one or two of the three.

Factor replacement concentrates are made from donated human plasma that has been screened for disease and heat-treated to destroy any potential infectious agent. Humate-P and Alphanate are used to treat hemophilia A and von Willebrand disease (VWD). Mononine and ProfilNine (Factor IX) and Corifact (Factor XIII) are examples of other factor replacement concentrates derived from human plasma.

There are fewer products available to treat rare bleeding disorders such as deficiencies in clotting factors I, II, and V, as well as those caused by deficiencies in multiple factors. Rare bleeding disorders may be treated with fresh frozen plasma or prothrombin complex concentrate, both of which contain a combination of clotting factors. Fresh frozen plasma is often needed in large quantities to be effective. Cryoprecipitate, or cryo – a product made from frozen blood plasma – may also be used, but unlike the other two multi-factor products mentioned, cryoprecipitate does not undergo treatment to inactivate viruses.

Medication to Prevent or Control Bleeding

Amicar (Aminocaproic acid) and Cyklokapron (Tranexamic acid) are antifibrinolytics – drugs that prevent bleeding by inhibiting the breakdown of blood clots. Amicar is taken orally, while Cyklokapron is injected intravenously. Antifibrinolytics are more commonly used to treat people with hemophilia B and women with excessive menstrual bleeding due to a bleeding disorder.

Hormonal contraceptives such as the birth control pill or intrauterine devices (IUDs) can help control excessive menstrual bleeding in some women with bleeding disorders.

In some people, bleeding disorders are related to vitamin K deficiency. Vitamin K may be taken orally or injected.

Can Diet and Exercise Help People With Hemophilia?

Exercise can strengthen your muscles, help protect your joints, and lower your risk for bleeds. Better fitness can help improve balance and cut down on accidents that may result in bleeding.

Joint pain, stiffness, and concern about bleeds lead many people with hemophilia to give up on exercise and become increasingly sedentary. However, muscle and joint weakness leads to more bleeds, and a sedentary lifestyle contributes to the development of other conditions such as osteoporosis and diabetes.

Some people with joint problems due to hemophilia can benefit from physical therapy. A physical therapist can teach you strategies to improve joint function and overcome physical challenges. Your physical therapist will teach you different exercises you can do on your own at home. Exercises may include stretching, strengthening, and conditioning movements.

A balanced, nutritious diet can help people with hemophilia maintain a healthy weight and lower their risk for chronic conditions such as diabetes, osteoporosis, and heart disease. Excess weight is especially problematic for people with bleeding disorders because it increases the demand on muscles and joints, raising the risk for bleeds.

What Are Inhibitors, and How Are They Treated?

Inhibitors themselves can be treated in some people via immune tolerance induction (ITI). ITI involves taking large daily doses of replacement factor to “train” the immune system to tolerate it. ITT take approximately one year to show results in most people, but it may also take two years or longer. Immune tolerance induction is not effective in all people. ITI is extremely expensive. People who undergo ITI usually need to get a central venous access device, such as a port or arterio-venous fistula, surgically implanted.

Are there natural or complementary treatments for hemophilia?
Some people with hemophilia report feeling better after trying complementary or alternative treatments. Therapies such as tai chi, massage, biofeedback, herbal supplements, meditation, or prayer may help some people reduce stress, improve sleep, and feel less pain. Since some natural or complementary treatments can worsen bleeding, interfere with medications, or cause their own side effects, it is important to talk to your doctor before trying any alternative treatments.