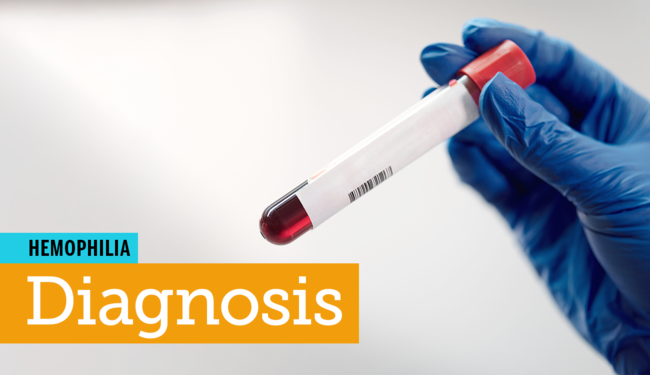 When and how a bleeding disorder is diagnosed depends on what type of bleeding disorder the person has, the severity of their condition, and sometimes their gender. It can also depend on how quickly a medical professional spots the symptoms and refers them to a hematologist.

Hemophilia is usually diagnosed by a hematologist — a specialist in disorders of the blood, bone marrow, and lymphatic system. In some cases, bleeding disorders are diagnosed by emergency room physicians, general practitioners, or gynecologists.

How Is Hemophilia Diagnosed?

Babies with severe hemophilia A may be diagnosed at birth and are often diagnosed within the first month of life. Families with a history of hemophilia may even request prenatal testing to check for a bleeding disorder during pregnancy. Babies are not usually tested for hemophilia B until they are a few months old, since factor 9 requires time to develop. Babies with type 3 (severe) von Willebrand disease (VWD) are usually diagnosed within the first year. For those with mild or moderate bleeding disorders, the condition may not be diagnosed until later in childhood or even adulthood.

Tests and What They Show

Some tests can provide proof of low levels of clotting factor, while others are performed to rule out other conditions.

The doctor will take a thorough history, asking about symptoms over time and family history of bleeding disorders that will help them assess risk factors for hemophilia. The doctor may conduct a physical exam to check for pain and swelling associated with joint bleeds or other symptoms.

Unlike clotting factor assays, which determine the amount of factor, clotting tests check how well the clotting mechanism works. Several different tests examine the makeup of the blood and how effectively it clots. Clotting tests are performed in the laboratory using a blood sample. Hematologists may order these tests to gain a better understanding of what is causing bleeding problems.

Women with a family history of hemophilia may choose to be tested to find out if they are carriers of the gene before becoming pregnant. Knowing the odds helps some families feel better prepared. Some women who are carriers for hemophilia have mild hemophilia themselves and may be at risk for excessive bleeding after giving birth. Treating clotting deficiency before and after childbirth can help prevent dangerous hemorrhages (bleeds).

Similarly, women with no family history who give birth to a child with a bleeding disorder may undergo genetic testing to find out whether the condition has a familial basis. Some mothers find out they also have low levels of clotting factor and begin treatment. Finding out that genes for bleeding disorders run in the family can be frightening, but it can also encourage other family members to look for symptoms, get tested, and seek treatment that may prevent life-threatening bleeds.

A complete blood count (CBC) can determine whether clotting problems are being caused by an abnormally low level of platelets, blood cell fragments necessary for proper clotting. If platelets are low, bleeding problems may be caused by a platelet disorder and not a bleeding disorder.

Ruling Out Other Conditions

Several other conditions can produce bleeding and bruising like that seen in bleeding disorders. The process of ruling out similar conditions is referred to as differential diagnosis. To list just a few, conditions that may resemble hemophilia, VWD, or another bleeding disorder include vitamin K deficiency, a platelet disorder such as idiopathic thrombocytopenia purpura (ITP), and cancers such as leukemia or lymphoma.

Due to the way hemophilia is inherited, doctors believed for many years that only boys and men had bleeding disorders, and girls and women were always asymptomatic carriers. In recent years, more doctors have recognized that symptoms of bleeding disorders tend to be overlooked in women. Part of the explanation for the failure to diagnose and treat females on par with males is due to the fact that there was a poor understanding of how the disease manifests in women. The first symptom of a bleeding disorder for some girls is menorrhagia, or heavy menstrual bleeding, which is often dismissed. Menorrhagia may cause anemia (low red blood cell count) that leads to weakness and fatigue. Later, women with bleeding disorders may have heavier-than-normal bleeding with surgeries, during pregnancy, or after childbirth. Since some bleeding is expected with all of these events, doctors may not recognize an undiagnosed bleeding disorder.

Although Von Willebrand disease affects men and women equally, women are more likely to be diagnosed than men due to heavier-than-normal bleeding with menstruation, pregnancy, and childbirth. About two-thirds of those treated for VWD at hemophilia treatment centers are female.

What Is the Prognosis For Hemophilia?