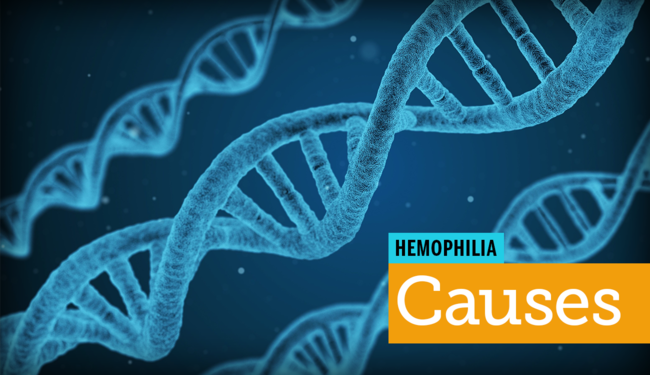 Hemophilia is a group of bleeding disorders that are caused by a deficiency of blood clotting factors, the proteins and enzymes that are necessary for normal clot formation. Blood clotting, or coagulation, is an important part of hemostasis, which is the body’s mechanism for preventing blood loss.

Symptoms of hemophilia can vary in severity among individuals. In those with mild hemophilia, symptoms may be limited to easy bruising, nosebleeds, and excessive bleeding after surgery. Severe hemophilia may cause spontaneous bleeding, including life-threatening internal bleeding and brain hemorrhage.

How Do Blood Clots Form?

To understand how clotting factor deficiencies cause hemophilia, you first need to understand how blood clots form. The process of normal blood clotting, called the coagulation cascade, is complicated and involves many steps. To put it simply, tissue damage triggers a chain reaction where one clotting factor is activated. That factor activates a second factor, which activates a third factor, and so on.

Ultimately, a blood clot is formed from blood platelets, red blood cells, and fibrin, a protein that binds the clot together. If any one of these required clotting factors is not available, then the chain reaction stops and blood clots cannot form, leading to bleeding disorders.

What Causes the Different Types of Hemophilia?

Some rare types of hemophilia are caused by deficiencies of other clotting factors, including factors 1, 2, 5, 7, 10, 11, 12, and 13. In very rare situations, people can have a deficiency of more than one clotting factor.

Hemophilia is usually inherited, but hemophilia can also occur without a family history of the disease. Most hemophilia is congenital (present at birth), but in some people, symptoms may not occur until later in childhood or adulthood.

Most cases of hemophilia A and B are due to inherited mutations in the genes for factor 8 and factor 9. The genes for both of these factors are found in the X chromosome. The X and Y chromosomes determine sex (XX for female and XY for male), so mutations that occur in these chromosomes are not inherited the same way as other gene mutations.

Hemophilia A and B follow an X-linked recessive pattern of inheritance. This pattern means that all males who inherit the gene will develop the disease, and all of their female children will be carriers of the gene.

Females who are carriers of the gene don’t usually have symptoms. The children of carriers have a 50-50 chance of inheriting the gene. Some female carriers of hemophilia genes can develop mild disease, but females typically only develop hemophilia if they inherit two copies of the mutated gene (one from each parent).

Rarer types of hemophilia and related bleeding disorders, such as von Willebrand disease, follow different patterns of inheritance that can cause disease in both males and females.

Although hemophilia is usually caused by an inherited gene mutation, about one-third of people with hemophilia have no family history of the disease. Spontaneous mutations in the genes for factor 8 or 9 are believed to be responsible for causing hemophilia in these people.

Hemophilia is most often caused by genetic mutations, but the disorder can sometimes occur due to other conditions. Another type of hemophilia, called acquired hemophilia, occurs as a result of other diseases that prevent factor production or destroy clotting factors. Acquired hemophilia develops later in life and has many different potential causes. About half of all cases of acquired hemophilia have no known cause.

Kristopher Bunting, M.D. studied chemistry and life sciences at the U.S. Military Academy, West Point, and received his doctor of medicine degree from Tulane University. Learn more about him here.